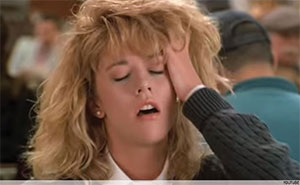 This might prove to be a shocker for any woman out there faking orgasms – your partner knows all about it.  He may not know the exact reasoning behind your actions, but he can probably tell when you’re not reaching your sexual peak.  Hopefully, if you are one of the many fakers out there, this article will pique your interest.

According to published studies, eighty percent of women have faked an orgasm (or more) in their lifetimes.  So, if you belong in that category, you should know that you are not alone.  Even worse, there are women out there who aren’t able to climax whatsoever.  If you’re part of that unlucky group, then you might want to reach out and discuss the matter with your doctor.  For the rest, read on about reasons behind faking orgasms and what you can do to achieve real orgasms that you won’t have to lie about.

Reasons Behind Faking It

Of the many women surveyed who have claimed to have faked their orgasms, many say that they do it to avoid hurting their man’s feelings.  Perhaps your guy is going the extra mile in order to try and please you, but nothing seems to be working to get you to the point of no return.

Maybe you’re too tired for sex or are in pain and just want to hurry the experience along.  Either way, instead of communicating, women who fake it are covering up their feelings and trying to shelter their partners from their true feelings.

Again, this goes along with trying to avoid hurting your partner’s feelings.  When it comes to sex, if you’re faking it so that you don’t disappoint him, you’re doing both of you a disservice.  In addition, there is a good chance that he is going to be able to sense when you aren’t getting as much enjoyment out of the sexual experience.

Many men are finely tuned to their partners’ bodies and know when they have reached orgasm.  Even still, he may know that you’re faking it and still choose not to talk about it to avoid causing you embarrassment.

In order to improve the satisfaction that you get from sex, you can follow the tips below:

Many married couples report that they are more sexually satisfied than couples who haven’t tied the knot.  We aren’t telling you to run right out and tie the knot now, but there is something to be said for people who are in long-term relationships.  These couples don’t normally hold anything back about sex or their enjoyment in it, so they are less likely to fake it when it comes to orgasms.  If you couple that with spending a great deal of time with your partner, you are bound to know everything there is to know about them – including their sexual preferences.

The best and healthiest relationships have a great level of communication in all aspects, sex included.

Ask Your Partner About Their Sexual Preferences

We don’t walk into relationships knowing everything there is to know about our partner’s sexual wants and desires.  What better way to get to know what they like than to simply ask them?   While men are typically stimulated by contact with the penis, women who want to achieve an orgasm can be different animals.  Some can be stimulated by rubbing the clitoris, while others need sexual intercourse or G-spot stimulation in order to come.  Either way, it only benefits your sexual relationship and relationship overall to ask for your partner’s preferences and keep that in mind when you’re engaging in sexual activity.

Why Not Try Something New?

There is nothing worse than going to have sex with your partner and it’s the same old boring sex that you’ve had many times before.  Instead of having sex on Wednesday as scheduled at 8pm in the missionary position, why not give that up and try something completely different?

Whether you choose different scenery, a different position entirely, toys or lingerie, you will both fully enjoy the benefits of taking things up to a higher level.  You are on the right path when you decide to let your imagination take over.

Many aphrodisiacs are made up from herbs that can stimulate testosterone production or work to increase the levels of serotonin in our bodies.  In a lot of cases, aphrodisiacs are still a mystery to modern science, but a lot of people have reported the many benefits they have seen from these foods and herbs.

If you wish to increase intimacy overall, try a food that is considered an aphrodisiac.  These foods can be anything from strawberries, bananas, nuts, figs, celery and chocolate to watermelon and oysters.  The good news about these wonderful food items is three-fold: they are inexpensive to purchase, all natural and easy to find at your local grocery store.

Instead of being one of the people who fake their orgasms with their partner, your sexual desire will be through the roof.  No longer will you just want to “get it over with” so that your partner will have an orgasm, but you will be joining him in the ecstasy and intimacy created by sexual contact.

With these little changes that you can make to your diet, you and your partner can both be on your way to increased intimacy, libido and a higher rate of achieving those elusive orgasms.  These methods are natural and don’t have any side effects at all.  Consider adding a supplement into your life if the foods we’ve mentioned don’t help you in the sex department.  There are various herbs and vitamins that can work with your body to help you stimulate your sex organs.

Now that you have all of this information, it’s completely up to you to use it!

9 Steps to Seducing a Woman

Getting Back In The Mood For Sex: A Guide

How to Maximize the Power of Any Aphrodisiac

How Obesity Can Negatively Affect Your Sex Life